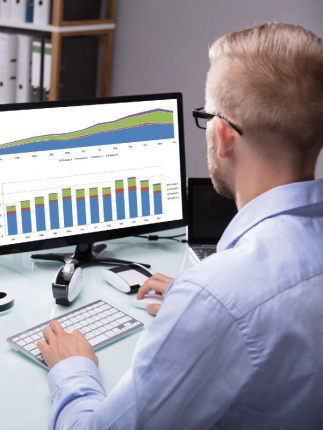 After another all-time high in December, the markets were shaken up in January. Shocking inflation data continues to be published around the world, inflation records are being beaten for 3-4 decades. We can already state a change in the tone of the central bankers. So the head of the ECB, for example, stopped saying that this year a rate hike is extremely unlikely, in the US markets are already waiting for 5-6 rate hikes this year, various options are being discussed to reduce the Fed's balance sheet, there are also opinions that the first increase can be made immediately by 50 basis points instead of the usual 25. As a result, the yield of bonds of developed countries increased significantly, the decrease in the S&P 500 index for the month amounted to 5.3%. Meanwhile, China continues the crisis among developers. Even the most reliable of them have discovered problems with debts that are not reflected in the financial statements, which, of course, are aggravated so far due to a sharp drop in real estate sales. As a result, while most countries are talking about tightening monetary policy, China, on the contrary, is softening it, despite inflation.

In Ukraine, the issue of security came to the fore and overshadowed all other news. The Russian Federation has deployed more than 150,000 soldiers and thousands of pieces of equipment on our borders. Putin issued an ultimatum to the West with impossible demands, for example, about returning NATO to the 1997 borders. Among other things, Russian propaganda whips up hysteria. Of course, the risk of war does not add investment attractiveness to the Ukrainian economy, and one can expect a slowdown in the Ukrainian economy even if there is no war in the end. The dollar, for example, is already trading above 28 hryvnia, and this is with significant NBU interventions. Of course, we are not military experts and cannot know what is in Putin's head, but we still note that we consider a large-scale invasion of Ukraine to be a crazy and losing idea for Russia. We agree with the assessments of Minister of Defense Reznikov that the Russian group is not enough to capture and hold a significant part of Ukraine. As for the economic damage, we think Ukraine will not be abandoned by partners with their financial support, and therefore such extreme scenarios as the collapse of the banking system or default can be avoided even with a large-scale conflict, which, we hope, will not happen.